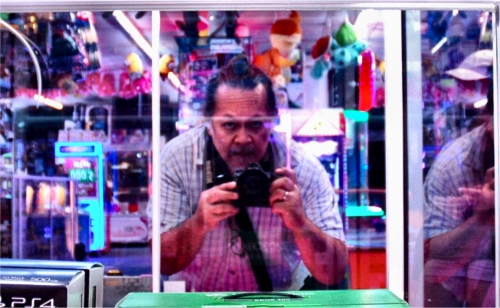 My mother worked nights at home, daytime too,
in the house, at the sewing machine, making dresses
for women who could afford to have dresses made
for them. We bought our clothes at the store, though
sometimes she would sew something special for us–
a vest, a Barong Tagalog made out of sheer white
fabric which I never wore because I thought it would
make me look even less American than I already did
with what the kids at school sometimes called my
Chinese Checkers eyes. I liked jeans and tee shirts,
sneakers, the Beatles and the Rolling Stones and
I’d never think of playing The Reycard Duet with
Tony Maiquez and his Ukelele Gang singing
“Oh! Baby” which was wild and raw and—though
I didn’t know the word for it at the time—badass.
My father took care of the ambassador’s residence,
made sure water ran through every pipe, and lights
went on in every big, fancy bedroom and in the
grand dining room where every piece of furniture
was hand-carved with ivory inlays and where the
long narrow halls were big enough for us to live in.
At nights he served drinks and appetizers to the class
of people who could drink strong drinks and
eat gourmet meals, hoping each night for good tips
and maybe good leftovers which he could bring
home to us—strawberries in custard in a miniature
pie shell, flaky black and white pastries that came in
layers that fell apart like the times as we bit into them,
staying up a little later than we were supposed to,
waiting for our treats, but mostly for him, which
was when my mom would turn the sewing machine
off for the night and come into the fluorescent light
of the kitchen, where we’d sit, the sweet taste on
our tongues interrupting every stray question and
tidy answer, our eyes getting heavier, happy, content
with long tiring days ending in long bright nights.

A Mix Tape for My Dad

I don’t remember him ever being in control
of the Magnavox stereo console in our
living room. Usually it was my Mom, picking
out one of the twelve LPs from the Reader’s Digest
Festival of Light Classical Music set, the one
with Renoir’s Bal du moulin de la Galette on the
cover of the box that held all the LPs, or on

high energy days playing one 45 after
another, a string of tunes that would always reach its
peak when I’d stare at the record label as it spun
on the turntable, trying to follow the
capitol ‘S’ on the Specialty Records pressing
of The Reycard Duet with Tony Maiquez and his
Ukelele Gang performing “Oh Baby,” a song

that was actually a Tagalog version of
Little Richard’s “Long Tall Sally,” and which always
seemed to play more loudly than all the other records
put together and put a grin on my Dad’s face and
made him nod and follow that nod with a second nod,
which was as close to head-banging musical bliss as
he ever got. Music wasn’t something my Dad ever took

the time to choose. Instead, it chose him, and if we
played it and he liked it that was good. You could see it
in the focus of his eyes while he read the paper
if the music me or my brothers were playing
on the stereo was helping him or hindering him
as he went about his daily quest for news–news about
the world, about home, and about back home across the

ocean, a place he visited for the last time in the
70s, though now that I think of it, maybe there was one
other time. That was when he had his car accident the last year
he ever drove, because when he came to after the crash
he thought he was in the Philippines again, and I always
wondered what he saw. Did he see the waterfalls, the churches,
his friends playing baseball in the barrio, did he see my Mom

who’d been dead for five years at that time and if he did,
what did he say to her? And, finally, what was the
music he heard, the music that chose him when his car
came to a stop and began to collapse around him?
For two days he was delirious as the faintest
of stars, but when his head cleared I saw him sitting up
in his hospital bed saying “I survived” and nodding,

and I was expecting him to say something else at
that moment like “I WILL survive,” a declaration
from a song, a statement of determination like
A Love Supreme, the Symphony No. 9 in D
minor, or What’s Goin’ On? And this poem is a mix
tape for my Dad, written in the old style and recorded
on paper on the anniversary of his death.

It lies still upon the page, it does not spin, yet it
moves just the same. Like his life, it is meant to be seen
as well as heard, and like the song that starts everyone
moving, their heads nodding, their feet lifting, turning, and
shifting, it will be as long and loud as it needs to be
to take us from classical beginnings, to slow sad endings,
then back home to this eternal, curving universe of sound.