Further Notes and Observations on the Spirit That Moves Us 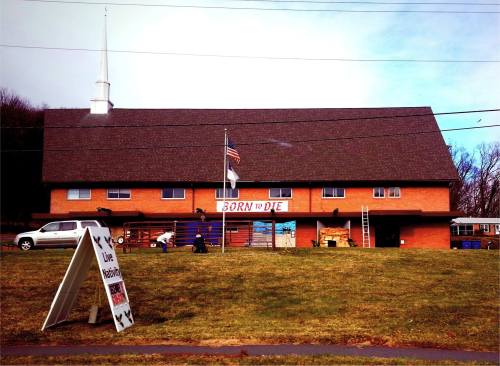 It’s been a long time since the word Catholic, much less Christian, could be used to describe my approach toward spirituality. Yet, at this time of year, I do get this feeling that I must admit comes from that time in the past when I was a follower of such things. It is, certainly, a manifestation of a side of me that is unapologetically sentimental. And, perhaps, a concession that for my children, a lot of the old Christmas traditions are actually quite enjoyable. Or even, dare I say, magical. All of which is to say that even though I myself am not now a believer in any traditional sense, I am happy to have come from a state of believing. I am also happy that when I was a believer I was not involved in the manner of believing as practiced by the Skyline Baptist Church.

This morning I took a photograph of that church, which is down the road from us here in Front Royal, as they prepared for their annual Born to Die festival. Well, I suppose that they officially refer to it as their annual live nativity presentation, which is how they describe it on the sandwich board they place down by John Marshall Highway every year at this time. But, when you look to the church itself, what you see is that Born to Die banner—and an approach to spirituality that I find troublesome at best.

Although the Catholic church certainly has its own macabre elements. My favorite example of this is the hymn about Jesus on the crucifix that went, “Oh sacred head surrounded, by crown of piercing thorns”—with the musical accent being on that crown of piercing thorns. Still, I don’t think this compares with the Facebook posting I once saw of a Baptist minister in the Midwest who to illustrate his observation that it was a “glorious day in God’s creation” chose a photograph of himself holding a muskrat impaled on a stick. This same minister then went on to speak of God’s “violent acts of love.”

It’s precisely this sort of so-called spirituality that seems push me from my usual agnostic stance toward one of pure disbelief. Yet I find atheism, and its utter certainty that there’s no such thing as God or deity of any sort to be just as depressingly lacking in imagination as the fundamentalist Christian vision of god as an all-powerful spoiled brat who demands that you worship him or else face the horror of eternal damnation.

Of course, if I had to choose one over the other, I’d opt for atheism over the spoiled brat vision of god any time. Still, there are those moments about which atheism has nothing to say. As with the other day, after I’d picked up Maggie from school with Julien and we went home and sat in the living room as Julien watched an episode of Dora The Explorer. Maggie and I came up with the idea for a show in which Dora is a bad guy, called Dora The Corporate Executive. This Dora would ask her viewers things like, “Can you say hostile takeover?” and “Strikers, stop striking.”

After watching Dora, Julien started playing with his trains, and Maggie went to the hall to practice on the piano. I took the opportunity to check my work email on the laptop I have setup at the dining room table, and it was there that I heard a song that sounded familiar coming from the piano in the hallway. It took me a few moments to recognize it, because somehow it wasn’t the sort of song I expected I’d ever hear being played on our piano at home. And what I was hearing were the opening bars of Ryuichi Sakamoto’s “Merry Christmas, Mr. Lawrence.”

The song was part of the soundtrack Ryuichi Sakamoto did for director Nagisa Oshima’s eponymously titled film, and I’d always been surprised that this peaceful bit of melancholy is what stays with me from that prisoner of war drama. That out of war, violence, and death, what I always came back to was this. And on hearing Maggie playing these notes, I somehow felt this connection to decades long gone—my mother, living through the Japanese occupation of the Philippines; my father, working at a hotel, after the end of war and their separate journeys, over the ocean, to meet here in the states; and all of the separate journeys—mine, Heather’s, Maggie’s, Julien’s—that brought us to where we are now.

And so, this season, it was the music—and certainly not any “violent acts of love” or the notion that Jesus was “born to die”—that put me in the spirit of things. And although this spirit may still have something to do with “Christmas,” it’s not, for me, a Christian thing. Or any rate, not the sort of Christianity that focuses on death and violence and the annihilation of its enemies.

Mind you, this doesn’t mean I won’t be thinking about those who oppose me and my kind this season. That, for the sake of celebration, I will banish all consideration of the crimes of torturers, racially profiling killers, oligarchs with their obscene wealth and power, the heinous demagogue with twitter compulsive disorder who will soon be the president of my country, and all the other murderers of both life and spirit. It’s just that I’ve accepted that for any person of conscience, struggle is a way of life; and that those true moments of peace and connection can’t be manufactured—they have to be found, over and over again. Which is why the best among us are always looking for something.

Every Man for Himself 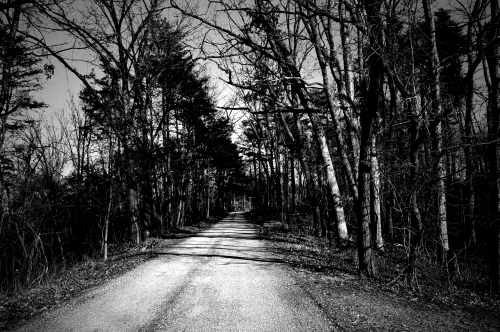 The brother nods back silently to me
as he places my jar of honey with ginger
in a paper bag at the monastery store
in Berryville. Why would such a man
ever want to speak to me, also a man,
but of such noisy, grunting spirituality,
would any one in his right mind
ever call it spirituality? Not me.
Meditation for me can be a single
key struck on a piano in a darkened
hallway, but just as often is a scream
toward the menacing, expanding drift
of the bending trees above me. It’s
the screaming they call the distance
for those too remote to see me. It’s the
case for being we’ve each selected,
his in silence and mine in cacophony.
It’s the way my lack of mastery of
everything in my head dissolves itself
into a thousand beautiful fragments of grace.