I Dreamed You Paid Your Dues in Canada

Does Van Morrison drive and if he does
I wonder if he drives a mini-van?
I started driving a mini-van in 2005
when we thought we were going to have
another baby, but we didn’t have that baby
until 2010, and a mini-van is probably
the sort of vehicle you’d expect a man
like me with a wife, a daughter and
a son to drive. Twenty years ago, before
I left for New York, I drove a Dodge
Charger, just like Frank Booth, the wicked
character Dennis Hopper played in David
Lynch’s 1986 film Blue Velvet, and
before that I drove a red VW bug that
one night got smashed to bits by a
brown Pontiac when I parked it outside
the 9:30 Club in DC to see The Bush Tetras,
a band most people remember for the song
“Too Many Creeps” but which I remember
more for my car getting destroyed while
listening to them play that song live on stage.
That’s when I got my Frank Booth car.
And though Dennis Hopper once said
“I am Frank Booth” to David Lynch
and everyone believed him at least a little
bit, that’s not me, even though I did drive
a Frank Booth car for a number of years,
and even though sometimes, at parties,
I would do a Frank Booth-inspired dance,
jerking out my hands in what might be called
an anti-jazz hands move, when what I wished
I could have done was break out in song
with a voice like Van Morrison’s, singing
hush-a-bye don’t ever think about it,
and taking everyone by surprise like that
because it’s not something, it’s a thing
that people wouldn’t think me capable
of doing, just like when I was in fourth grade,
and while waiting in line at the water fountain
I suddenly broke out and danced like James Brown
(for half a minute) as I listened to the sound
of “Papa’s Got a Brand New Bag (Part 1)”
playing in my head the way it sometimes did
in those days. It wasn’t what anyone expected
and it wasn’t even what I expected, especially
since I’m not James Brown and I’m not Frank
Booth or Dennis Hopper or Van Morrison and
I’ve never been mistaken for any of these people
and never been expected to do what they do or did,
because James Brown and Dennis Hopper are dead,
Van Morrison is alive, and Frank Booth never existed,
and I don’t know if Van Morrison is somewhere
right now, behind the wheel of his mini-van,
on the way back home from the grocery store
with a pork roast, a bag of frozen vegetables,
and a half-gallon of strawberry ice cream, but I am,
living my life among the trees and the two-story,
sometimes paint-peeling streets, and though I rarely
get to dance anymore I love these days spent like
leaves floating on low water, and the song that
plays in the background, filling my mind with vision.

The Summer of Rock and Other Fragile Ecstasies 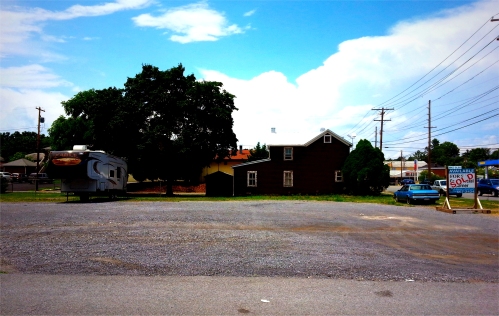 At first it was just the summer of rock.
Every burger I ate was fast, every morning
had a beat, every hour out of school was
a guitar chord no one had ever heard before.
I was ten years old or eleven though I wished
I could be twenty-five. My blood felt like
it flowed through a wah-wah pedal, and
even all the strings and voices in Beethoven’s
ninth seemed to rock out until I went dizzy,
until I was spinning around and around,
digging my way to the center of the original
Earth. Jimi Hendrix was the real thing, and
The Doors were on the car radio too as we
rode across town with the voice of Jim Morrison,
wild and cool, but even then I thought he was
also just kind of a dick. I would have rather
hung out with the fat guy Billy Stewart
who sang a version of “Summertime and
the living is easy” and made this weird
beautiful bird sound with his lips that was
more than enough to show me what it meant
to get high when I was a child before he drove
off the road and died. And I learned I could run,
imagining I was an Olympic runner with his
hands held high at the finishing line even
when I was just running out of breath
because it was the summer when I discovered
how hard it was to breathe sometimes. Everyone
could take me when it came to running for
distance, but if it was a quick dash to the bus
stop, or across the street from the old burlesque
clubs on 14th Street in DC, I could beat anyone.
Like Professor Irwin Corey I was the world’s
foremost authority—of running fast for half
a minute. And back in school I could dance
in class for half a minute like James Brown,
holding up my arms, swiveling my grade school
hips like the cool guys and getting smiles from
all the girls. And there was a girl named Barbara
and a girl named Vanessa and a girl named Nancy
and a girl named Dolly, and these names all
sounded like abracadabra magic to me because
I was young then and the summer of rock
happened before I was old enough to really think
about this. Before I realized for the first time,
that no matter how fast I ran, or how long I danced
that chance could soon force me to leave it all
behind. Because at first it was the summer of rock,
and everyone I had ever loved was still alive
or else hadn’t been born yet. But it was also
another summer of war, the way just about
every summer is a summer of war. And with
so many dying young—looking into the battle
to feel its slimy heat, bite and gnaw on its grit
with their teeth and never coming back and
never telling anyone what it did to them—
I wondered what I’d do when I turned eighteen,
if I’d do anything, like stop trying to breathe,
just to be able to go the distance.