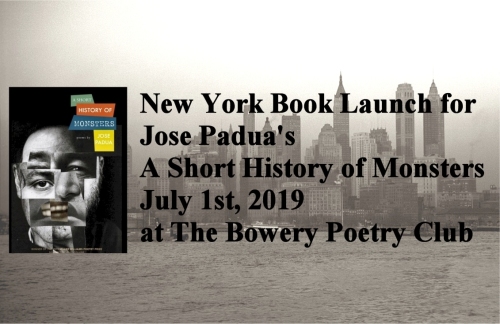 “When Jose Padua writes of ‘the beauty of the moment that comes alive without artifice,’ he could be describing these poems. They’re dispatches from a messy life, told with wry candor. His gift to us is a lesson in seeing through the little defeats we all suffer every day for a glimpse of transcendence. In the twenty-five years I’ve been reading him, I never once felt he was posturing or lying to me, which is high tribute for any writer.”
— John Strausbaugh, author of City of Sedition and Victory City

Drawing on the spirit of New York City in decades past, A Short History of Monsters presents the sins and obsessions of a poet nimble in beat and slam traditions. In his full-length colletion, Jose Padua wrestles with an American dream interrupted by failure, excess, and other nightmares. Often brash and unruly, these poems range from recollections of lost, drunken days to unadorned manifestations of hope. Throughout, the speaker redefines his relationship to pop culture, praising it, skewering it, and mourning it by turns.

The poems that make up A Short History of Monsters tend toward both dark humor and epiphany, diving deeply into their own despair and rising up again with existential absurdity. This is a poetry that gets down into the grit and grime of the real world, digging out a space to experience being alive as miraculous in and of itself.

About the Author:
Jose Padua’s first full length book, A Short History of Monsters, was chosen by former poet laureate Billy Collins as the winner of the 2019 Miller Williams Poetry Prize and is now out from the University of Arkansas Press. His poetry, fiction, and nonfiction have appeared in publications such as Bomb, Salon.com, Beloit Poetry Journal, Exquisite Corpse, Another Chicago Magazine, Unberables, Crimes of the Beats, Up is Up, but So Is Down: New York’s Downtown Literary Scene, 1974-1992, and others. He has written features and reviews for Salon, The Weeklings, NYPress, Washington City Paper, the Brooklyn Rail, and the New York Times, and has read his work at Lollapalooza, CBGBs, the Knitting Factory, the Public Theater, the Living Theater, the Nuyorican Poets’ Cafe, the St. Mark’s Poetry Project, and many other venues. He was a featured reader at the 2012 Split This Rock poetry festival and won the New Guard Review’s 2014 Knightville Poetry Prize.

A Short History of Monsters is available from: