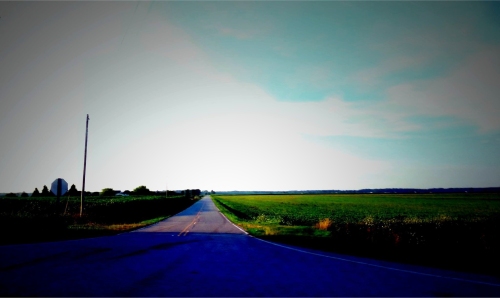 I was getting tired and was annoyed with all the traffic after hitting the outskirts of Richmond right around rush hour. I also had to keep reminding myself this was Wednesday not Saturday—and that even though we were heading out on the road it was not the weekend.

We’d left Front Royal at around two and took, as usual, the slow way. Route 522 going south seemed like the way to go, but that day, as it wound around Lake Anna in Louisa and Spotsylvania counties, I started to feel this sadness. My American sadness.

Lake Anna. It’s a man-made lake, formed in the early 70s to provide a source of water for the purpose of cooling the North Anna Nuclear Generating Station. Since then it’s become a popular vacation destination in Virginia, and every summer it fills with people swimming, boating, fishing. Maybe not everyone feels this way, but I find the idea of frolicking on a lake that was created to cool a nuclear power plant rather depressing. Of course, with my obsessive-compulsive mind, there are so many things that can send my thoughts veering off in some unpleasant or frightening direction.

When we got off of the slow, winding dreariness of Route 522 and onto the fast-paced madness of Interestate-64 at rush hour, I was pissed. Right away Heather picked up her phone in search of an alternate route, and she found one. All we had to do was go south of Richmond on 295 and we’d hit Route 460.

It was a slower road, going through these small run-down and run-over towns with vaguely British sounding names like Waverly, Wakefield, and Windsor as well as more intriguing names like New Bohemia and Disputanta. As is often the case when we’re on the road, there were numerous places where I wanted to stop the car, though not necessarily get out. This was, after all rural Virginia, and as fascinating and oddly beautiful as it can be, it’s not always the most welcoming of places. So we drove on, passing by gun shops and ammo shops and sometimes gun and ammo shops; seeing home-made signs along the road blaming Obama for everything imaginable, including one sign that urged people to fight Obamacare using the Edmund Burke quote, “The only thing necessary for the triumph of evil is for good men to do nothing.” Thinking that this quote would be more applicable commentary regarding Obama’s drone war, for instance, or for the record number of people his administration has deported, I had to give this sign the finger.

We drove on and on down 460, and then we got to Suffolk, Virginia. This was one town I was especially glad to go through, because according to what I’ve read, this is the town where one of my favorite musicians and songwriters, Fred Cornog (who records under the name “East River Pipe”) was born. I would have stopped, but we were already running late.

Suffolk was also where we saw, for the first time that day, a Confederate Flag flying from the back of some dickhead’s pickup truck. Well, there were most likely others, but that was the first one we noticed. But it was in Suffolk when Miles Davis’s “Right Off” from A Tribute to Jack Johnson came out of the random mix on the car stereo. It’s a piece of music that always lifts me up, always give me strength, and, looking back, I wonder if this was when the music of Miles Davis first clicked with Julien, who at the time was just four. Now, yearly a year later, Miles Davis is the music he always asks to hear, and it’s not unlikely that his appreciation of this music is a revelation that occurred on the road. I know that for me, the road is where a lot of revelations ascend as well as a determination to get where I want to be (and by getting where I want to be I’m not necessarily talking about an actual place so much as a place where I want my mind to dwell).

After we’d crossed the state line into North Carolina and were driving along the southern end of the Great Dismal Swamp, Mozart’s Piano Concerto No. 18 in B-flat major came on. Listening to it, with the swamp on the left, Heather to my right, and Maggie and Julien in the seats behind us, I got that pleasant sensation that happens every now and then when I feel as if I’m riding slightly off the ground. Flying, as it were, but at the sort of low and comfortable altitude I prefer. And moving forward in such a way that wherever we were, the ground beneath us felt like a home of sorts, a shelter—if only temporarily so—from all the vicious American dreams that clash with our own more peaceful ones.

Then we hit a clearing. That’s what you see in this photograph—the flat of the land of North Carolina as you get closer and closer to the shore. In a little while, we were in Elizabeth City, which was where we were stopping for the night. As we drove up to our hotel I saw, standing around the entrance, about a dozen or so good-ole-boy types. As I let Heather out the door so she could pick up the keys to our room, they all stared at me. It was that blank look of barely restrained disapproval—a look that sometimes disintegrates into something worse. A look that can say, as looks often do, a whole lot of different things—none of which were “Welcome to North Carolina.”